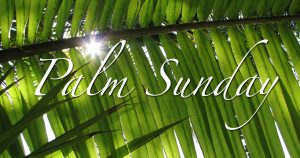 The Story Of The Entry Into Jerusalem

It was the beginning of the week of Passover, the most sacred week of the Jewish year – the time of year the faithful remembered the way their ancestors had been delivered from slavery in Egypt through the waters of the red sea across the desert and into the place, they believed to be the promised land.  In one part of the city of Jerusalem crowds were gathering to see if they could catch a glimpse of the governor Pontius Pilate whose custom it was to ride into the city each time he came with a whole Calvary of soldiers – hundreds of them marching row by row their heavy armour clanking through the streets some on foot others riding on majestic horses – a great show of power and might – an affirmation for all those who lived by the sword and valued the riches and prestige that this kind of power could bring – all who aspired for such riches.

The Story Of The Garden

After the parade was over – most of the people went home – Jerusalem could be a very dangerous place – punishment for treason was harsh — it wasn’t long before word got out that the authorities were looking for Jesus.  The crowds had been full of conviction about their new king but let’s face it – no one wanted to risk their life to follow someone who was about to risk theirs.

On Thursday of that week Jesus gathered with his friends in an upper room to share the Passover meal – they say he got down on his knees and washed their feet like a servant – he was just so very humble – after the meal had ended he headed out to the Mount of Olives to pray – he was fearful that night –Ii guess he knew his days were numbered.

He asked his followers to stay awake with him to watch and pray so they would not come into the time of trial – and then he went to pray – but his disciples fell asleep – maybe they were exhausted from all the highs and the lows of the week – I don’t know – what I do know is that when they woke up – it was too late – they had come to arrest him and take him away.

All: as we leave this place

All: in setting apart time and space

All: on the threshold of god’s possibilities

Leader: as we tend to god’s aching and wondrous world